Man tries to remove his tattoos using sand paper and salt, after failing and scarring himself turns to Laser Tattoo Removal with specialists www.firstimpressionslaser.com.au 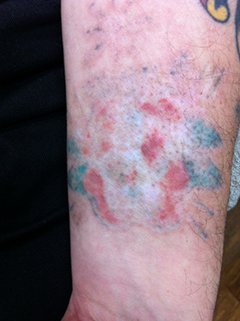 “Even with the progress in tattoo removal we still see some horrific scars and hear of blisters that spread the length and width of the tattoo site and these are from tattoo removals performed in clinics across Melbourne, the lack of training and cheap lasers have a great deal to answer for.”

“But worse still are home remedies, unfortunately due to the length of time and the price of having a tattoo removed some people resort to home remedies. We’ve had clients come in that have tried acetone and others have tried to scrape or cut the inked skin away. “

‘I performed derma – abrasion on myself’, was one clients claim as he rolled up his sleeves showing the laser technician at www.firstimpressionslaser.com.au the several sights he had previously treated himself and now wanted laser tattoo removal on.

“This client treated several of his tattoos by rubbing the epidermis with sandpaper until he had vast open wounds, onto which he poured salt hoping it would eat away at the ink like acid but instead of removing the tattoos he was left with:

“I would suggest anyone contemplating tattoo removal, research and never ever try doing it at home with abrasive solutions.”

Miss Ford advises “there are many things to consider when choosing a clinic for tattoo removal:

·      Is the laser technician qualified?
·      Is the machine they are using a good quality laser?
·      Does the clinic use the PicoSure Laser, as this removes tattoos in half the treatments than any other laser on the market, including Q-switched and is by far the safest on the market”

For Safer, Faster and Superior results that can only be promised by the PicoSure laser contact www.firstimpressionslaser.com.au or call 9639 3922.

About the Author: admin